Andrew, Edward and Anne join the King for Vigil of the Princes

The King and senior members of the Royal Family have held a vigil beside the Queen’s coffin in Edinburgh.

The coffin was taken to St Giles’ Cathedral this afternoon before a service of thanksgiving for her life.

King Charles, who was wearing a kilt, the Duke of York, the Princess Royal and the Earl of Wessex, stood facing outwards around their mother’s coffin in a tradition known as the Vigil of the Princes.

The Queen Consort and the Countess of Wessex looked on from the side.

Members of the public filed past to pay their respects as the four siblings stood in silence with their heads bowed.

The vigil lasted for 10 minutes, and afterwards the royals left the cathedral and were driven away.

Thousands of people had lined the procession route earlier in the afternoon as the coffin was taken to the cathedral, clapping and holding their phones high to capture the event.

It was draped with the Royal Standard of Scotland with a wreath of flowers of white spray roses, white freesias, white button chrysanthemums, dried white heather from Balmoral, spray eryngium, foliage, rosemary, hebe and pittosporum.

A man was arrested after heckling Prince Andrew as the procession went up the Royal Mile.

At the beginning of the service, Reverend Calum MacLeod welcomed the Royal Family, “representatives of our nation’s life” and “people whose lives were touched by the Queen in so many unforgettable ways”.

“And so we gather to bid Scotland’s farewell to our late monarch, whose life of service to the nation and the world we celebrate,” he said.

“And whose love for Scotland was legendary.”

All of the siblings except Prince Andrew wore military uniform.

The Duke of York, who was stripped of his military titles before he settled a civil sexual abuse case in the US in February, will not wear a uniform during the period of mourning, except for the final vigil. 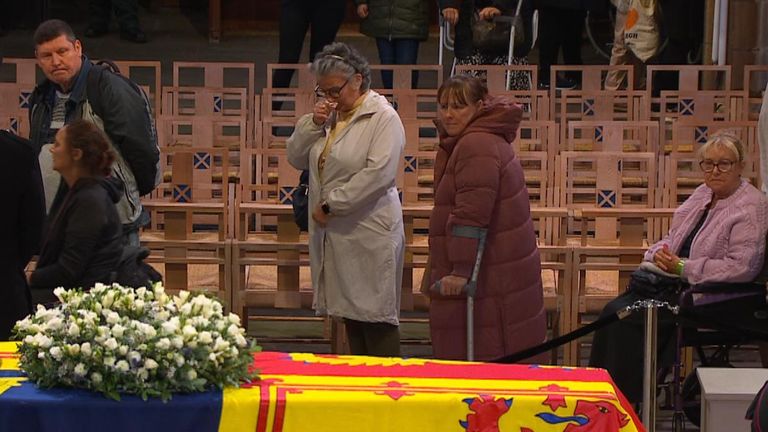 The King and the Queen Consort spent time greeting waiting crowds when they arrived at the Palace of Holyroodhouse earlier today.

People climbed on top of road barriers on the Royal Mile to catch a glimpse of the couple’s arrival.

They shook hands with well-wishers across the barrier, and the King was given flowers before he attended a Ceremony of the Keys and inspecting the guard of honour.

The King and Queen Consort observed flowers outside the palace before speaking to members of the military.

A gun salute was fired from Edinburgh Castle moments after they arrived in the Scottish capital.