The Bank of England has launched a temporary bond-buying programme as it takes emergency action to prevent “material risk” to UK financial stability.

It revealed that it would buy as many long-dated government bonds as needed between now and 14th October in a bid to stabilise financial markets in the wake of the mayhem that followed the government’s mini-budget last Friday.

In addition to the plunge in the value of the pound, it has also seen investors demand a greater rate of return for UK government bonds – essentially IOUs.

That is because the level of borrowing required to fund the government giveaway, including tax cuts and energy aid for households and businesses, shocked the market which immediately questioned the sustainability of the public finances.

What this action is aimed at doing is tackling consequences of rising yields, such as a liquidity crunch facing pension funds.

WHY THE BANK OF ENGLAND HAS ACTED

There are some very, very specific reasons why the Bank of England is intervening in this particular asset class in long-dated gilts – that’s gilts of a 20 to 30 year duration.

It affects traditional pension funds where a retiree is guaranteed a certain payout at their retirement based on their final salary when they retire.

Now, a lot of these funds use long-dated gilts as part of their investments and what has been happening over recent days is a lot of the investment funds have been asking pension funds to post more collateral – to put up cash.

It has been reported in The Times that actually these cash calls have been running into tens of billions of pounds since the beginning of the week because of this spike in long-dated gilt yields.

That is why the Bank of England is specifically targeting that with this gilt intervention.

It is aimed at seeing off a crisis that’s potentially starting to emerge in pension funds.

The Bank said in a statement: “Were dysfunction in this (long-dated bond) market to continue or worsen, there would be a material risk to UK financial stability.

“This would lead to an unwarranted tightening of financing conditions and a reduction of the flow of credit to the real economy.”

The programme marked the Bank’s first policy intervention as it battles to bring down inflation and ease the cost of living crisis. Its chief economist signalled on Tuesday that a “significant” rise in Bank rate was also likely ahead.

The government’s growth plan is only seen as adding inflationary pressure to the economy, leaving it at loggerheads with the Bank’s mandate. 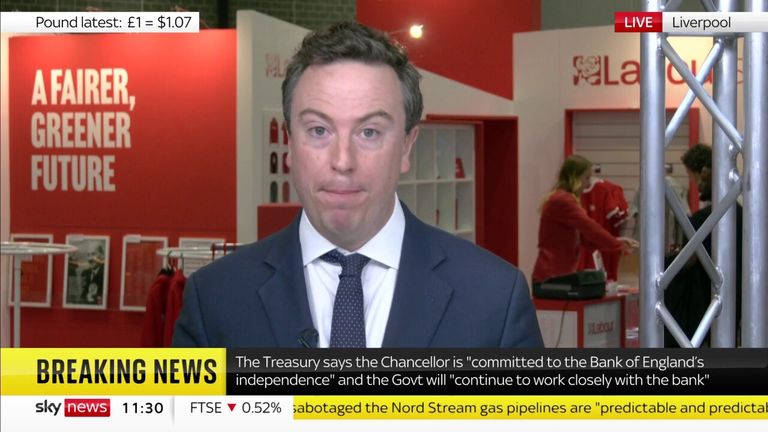 The Bank said the bond purchases, which would be fully covered by the Treasury in the event of any losses, would be sold back once market conditions had stabilised.

The announcement certainly had an immediate effect on the market.

Data showed that 30-year bond yields fell back to 4.3%, having risen to levels above 5% not seen since 2022 earlier in the day. There were similar falls for 20-year yields.

In addition to its bond-buying action, the Bank said it would postpone the start of its efforts to unwind the sale of bonds it acquired through financial crisis and COVID crisis era quantitative easing.

The Bank had planned to reduce its £838bn of gilt holdings by £80bn over the next year.

This would have been particularly evident for pension funds who have faced demands for additional cash to cover off rising yields.

“The question is whether (this Bank action) acts to stabilise longer-term or if the market retests the Bank’s resolve”, he wrote.

“We’re now seeing the Bank go toe-to-toe with the market and this might not lead to any decrease in volatility”, he warned.

Next prime minister is either Rishi Sunak or Liz Truss

Triple blow to earnings leaves some low-income families £1,600 worse off, even after govt support