‘Critical incidents’ declared at hospital and ambulance trusts across the country

Ambulance and hospital trusts across the country have declared critical incidents as a result of “sustained” and “unprecedented” pressure on services.

Declaring a critical incident allows trusts to prioritise the patients most in need and to instigate additional measures to protect patient safety, trusts said.

It comes as nurses were striking for a second day on Tuesday, and as fears grow over the impact of an ambulance strike on Wednesday – when thousands of paramedics, technicians, control room workers and other staff in England and Wales are set to walk out.

The services said they took their decisions due to pressures including 999 call volumes and hospital handover delays. All the trusts have urged members of the public to call 999 only in the case of a serious medical emergency.

As well as prioritising certain patients, critical incident status allows trusts to call off training sessions and bookings for non-emergency transportation, and call on other providers for help.

What have the different trusts said?

North East Ambulance Service, which operates across Northumberland, Tyne and Wear, County Durham, Darlington and Teesside, said the decision was made there as a result of “significant delays for more than 200 patients waiting for an ambulance, together with a reduction in ambulance crew availability to respond because of delays in handing over patients at the region’s hospitals”.

Chief operating officer Stephen Segasby said: “Our service is under unprecedented pressure. Declaring a critical incident means we can focus our resources on those patients most in need and communicates the pressures we are under to our health system partners who can provide support.”

He said the trust had been operating at “its highest level of operational alert since 5 December”.

South East Coast Ambulance Service, which covers Brighton and Hove, East Sussex, West Sussex, Kent, Surrey and North East Hampshire, said it had experienced “more than a week of sustained pressure across our 999 and 111 services, significantly impacting on our ability to respond to patients”.

A spokesperson said the situation would be kept under close review.

Read more:
‘A few nerves’ as armed forces prepare to drive ambulances during NHS strikes
Unions criticise plans to use troops to cover strikes
Police officers express ‘grave concern’ at driving ambulances during strikes
Strikes every day before Christmas – which sectors are affected and why
How A&E and other NHS services will be impacted

The East of England Ambulance Service, which works in Bedfordshire, Hertfordshire, Essex, Norfolk, Suffolk and Cambridgeshire, said NHS services in the region “are currently under huge pressure”, while London Ambulance Service also said its 999 and 111 services “remain extremely busy” and it would be prioritising the “sickest and most severely injured patients”.

Ambulances could be seen queuing outside Lister Hospital in Stevenage, Hertfordshire, on Tuesday.

Dr Girling continued: “We regret that this will impact patients who were due to receive planned care over the next few days and sincerely apologise to all those affected.”

A spokesperson for the hospital reassured patients that these appointments “will be rescheduled as soon as possible.”

Their statement added: “If your relative is due to be discharged from hospital and needs to be collected, please do so as early as possible. This will help our teams and free up a hospital bed for someone waiting to be admitted.”

In a statement, Portsmouth Hospitals University NHS Trust, which covers health services across Portsmouth and South East Hampshire, said “demand for an emergency response is far outstripping the capacity available… at this time”.

It continued: “There are significant and unacceptable delays currently and we apologise for this. We are doing everything in our power to meet the current demand. Our capacity will only be used for life-threatening conditions or injuries.” 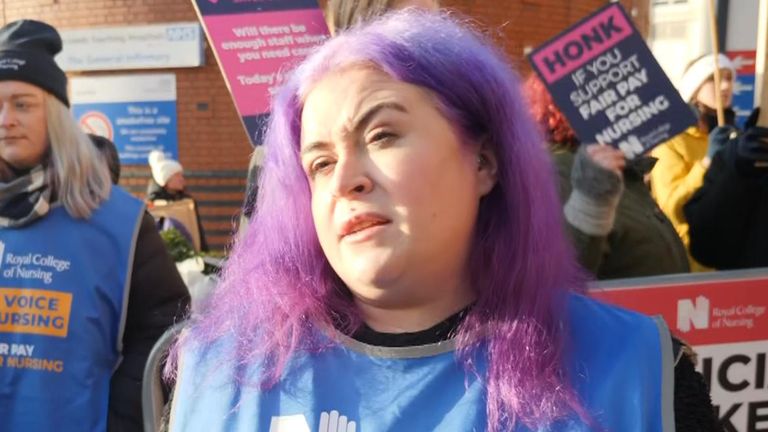 Thousands of nurses are staging a second walkout today, while ambulance workers who are GMB union members are striking on Wednesday. Both are calling for better pay, working conditions and improved conditions for patients.

The government has announced controversial plans to deploy more than 1,000 civil servants and 1,200 troops to cover striking ambulance workers and Border Force staff, who are preparing to walk out for eight days from 23 December until New Year’s Eve.

Unions branded the move a “desperate measure” and warned the servicemen and women are not “sufficiently trained” to plug staffing gaps on the front line.

During the ambulance strike, military personnel will not drive ambulances on blue lights for the most serious calls, but are expected to provide support on less serious calls.

Negotiations over which incidents should be exempt from strike action

Unions and ambulance services are still negotiating to work out which incidents should be exempt from strike action.

All Category 1 calls (the most life-threatening, such as cardiac arrest) will be responded to, while some ambulance trusts have agreed exemptions with unions for specific incidents within Category 2 (serious conditions, such as stroke or chest pain).

It means those who suffer trips, falls or other non-life-threatening injuries may not receive treatment.

The London Ambulance Service has said that “patients whose conditions are not life-threatening are unlikely to get an ambulance on industrial action days”.

GMB members are set to stage a second ambulance worker walkout on 28 December.

Rachel Harrison, a national secretary at the GMB trade union, has told MPs that unless the health secretary is willing to talk about pay, ambulance strikes will go ahead.