The cost of living crisis will deepen next year as people continue to be hit with falling pay, higher taxes and soaring bills, a think tank has warned.

Households face a cost of living “groundhog year” with disposable incomes plummeting even further than in 2022 and living standards getting “far worse” before they improve, according to the Resolution Foundation.

This is due to the continued shrinking of pay packets in real terms, with wages remaining well below current levels of inflation well into 2024.

Resolution Foundation chief executive Torsten Bell said: “From a cost of living perspective, 2022 was a truly horrendous year – far worse than any year in the pandemic or financial crisis.

“2023 should see the back of double-digit inflation, but it looks set to be a groundhog year for many families whose incomes look set to fall by just as much as they did in 2022.”

Mr Bell said many families will be helped by benefits and the National Living Wage rising, both by around 10% next April.

But he said this will be “swamped by shrinking pay packets, a record £900 rise in energy bills, tax bills for the typical household rising by £1,000, and millions seeing four digit increases in their mortgage bills”.

“For families’ living standards, things will get far worse in 2023 before they start to get better.” 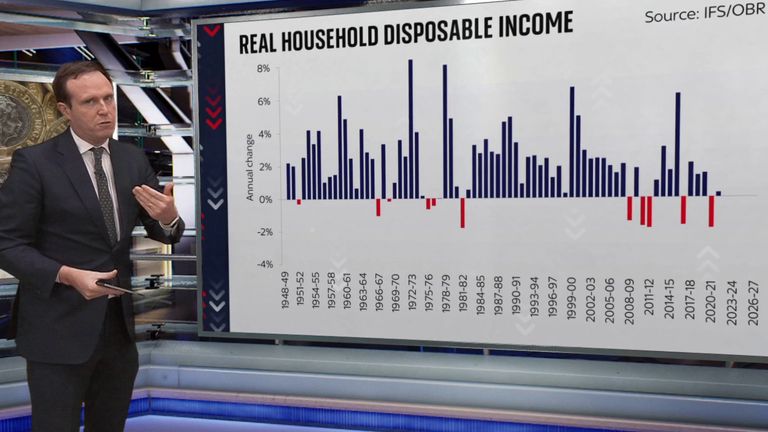 This year saw the biggest annual fall in disposable income in a century as well as a collapse in living standards.

Surging energy prices have been the main driver of the cost of living crisis – mostly a consequence of Russia’s invasion of Ukraine in February that sent the price of many commodities such as wheat, and the price of producing them, through the roof.

But experts have also pointed to trade barriers caused by Brexit and the disastrous mini-budget of the Truss administration.

In his Autumn Statement, Chancellor Jeremy Hunt announced a raft of tax hikes to help fill a £54bn black hole.

The measures will see a typical middle-income household’s personal tax bills jump by around £1,000 from April, according to the Resolution Foundation, which focuses on living standards.

This is despite wholesale energy prices having dropped, as retail prices continue to climb and government support is scaled back.

Incomes are also being squeezed by rising interest rates, which mean some 2 million households will move onto more expensive fixed-rate mortgages, costing the average mortgage-holder £3,000 more a year.

People are four times as likely to think that their financial situation has worsened than improved over the past year, according to a Resolution Foundation-commissioned YouGov survey of 10,470 adults.

The poll also found that low-income families are three times as likely as high-income families to not feel confident about their financial situation over the next three months.

Read More:
Inflation may have peaked but you should still be prepared for a bleak winter ahead
Millions of adults with health issues are living in cold and damp homes

The analysis comes as the UK braces for further strike action next year, as unions representing many sectors seek pay rises in-line with inflation.

The government is being urged to negotiate to prevent coordinated industrial action, but on Thursday Defence Secretary Ben Wallace insisted there is “no magic wand” to produce money for the pay demands.

In response to the Resolution Foundation’s report, the Treasury said it has increased child benefit and child tax credits in line with inflation and made changes to Universal Credit “so that working families can keep more of what they earn”.

The spokesperson added: “We also have a plan that will help to more than halve inflation next year, bearing down on the financial pressures that households face, and have already lifted millions of people out of paying tax altogether by raising the tax-free allowances for both income tax and National insurance by more than inflation since 2010.

“This is on top of substantial support with the cost of living, with everyone benefiting from energy bills being held down this winter and more than eight million vulnerable households having already received £1,200 in cash payments straight to their bank accounts – with a further £900 for those on means-tested benefits next year.”

What is the Demand Flexibility Service and how can I save £100 off my energy bill if I sign up?

FTX collapse shows crypto is ‘too dangerous’ not to regulate, says Bank of England