Parts of the UK are expected to see ice, heavy rain and potential flooding in the next few days, with a warning issued for disrupted power supplies and travel delays.

A yellow rain warning is in place in parts of southwest England and South Wales from 2am on 27 December until 3pm on Wednesday.

Across northern Scotland, a yellow ice warning has been put in place until 10am Wednesday.

The Environment Agency has also issued 34 flood alerts, advising people in affected areas to prepare for flooding by getting a bag together that includes medicines and insurance documents, and staying updated with its warnings.

Commuters have been warned that spray and flooding on roads may make journey times longer, and bus and train services could be affected, according to the Met Office.

Homeowners and businesses have also been told to expect some flooding, with some disruption to power supplies and other services also likely.

“We’re looking at the potential of being 40-60 millimetres of rainfall in nine to 12 hours before the rain clears away in the afternoon,” said Met Office meteorologist Rachel Ayers.

Northern Scotland is also expected to see some snow in high areas in the early hours of Wednesday morning.

However, the weather will be dry elsewhere, with rain developing in the South later on. 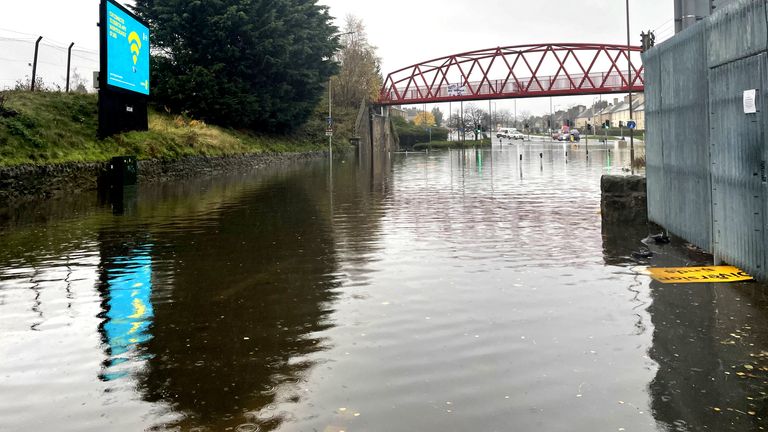 What about New Year’s Eve?

Later on Wednesday, there will be rain in Scotland, with the heaviest over hills in the southwest, and the South of England will also see coastal gales.

On Thursday 29 December, the weather is expected to be unsettled with blustery showers across the UK, with the North and West set to see the heaviest showers.

Read more:
Next year set to warmer than 2022
Technically, it was a white Christmas
Check the weather forecast where you are

The weather will then start dry on Friday morning before becoming wet and windy as the day progresses.

On New Year’s Eve, the inclement weather is forecast to clear to showers, with mild temperatures across the UK.

Ms Ayers added: “With that low pressure system moving through, we’re looking at the potential for coastal gales through English Channel coasts and then obviously the Irish Sea as well.”