The head of the World Health Organisation (WHO) has declared the monkeypox outbreak a “global health emergency”.

Dr Tedros Adhanom Ghebreyesus told a news conference that despite the WHO committee being unable to come to a consensus, he declared the emergency anyway as the tie-breaking vote.

He added the risk globally is “moderate”, except in Europe where it is “high”.

Read more:
How do you catch it, what are the symptoms, and how easily does it spread?
People with symptoms should not have sex, new UK guidance says

Dr Ghebreyesus said there had been more than 16,000 cases of monkeypox reported to the WHO from 75 countries, and five deaths.

The declaration by the WHO is designed to trigger an international response to the outbreak, which could unlock funding and vaccine sharing.

Dr Ghebreyesus also gave recommendations on how to implement a response, including:

• To engage and protect affected communities;
• To intensify surveillance and public health measures;
• To strengthen clinical management and infection prevention and control in hospitals and clinics;
• To accelerate research into the use of vaccines, therapeutics and other tools.

The disease has had a foothold in parts of central and west Africa for decades, and was not known to trigger large outbreaks beyond the continent.

However, in May, authorities in the US and western Europe detected dozens of outbreaks.

Earlier this week, Dr Rosamund Lewis, the WHO’s monkeypox expert, said 99% of all cases outside of Africa were in men, with 98% in men who have sex with other men.

She also warned that “stigma and discrimination are not okay. Stigma will not help, it will drive people away from seeking diagnostics.”

Some experts believe the spread began at two raves in Belgium and Spain.

The NHS website currently lists a high temperature, a headache, muscle aches, backache, swollen glands, shivering and exhaustion as symptoms, and is often characterised by pus-filled lesions on the skin.

The UK Health Security Agency (UKHSA) has procured an additional 100,000 doses of a vaccine to help tackle the spread of the virus, with those eligible being contacted by the NHS to get their jabs. 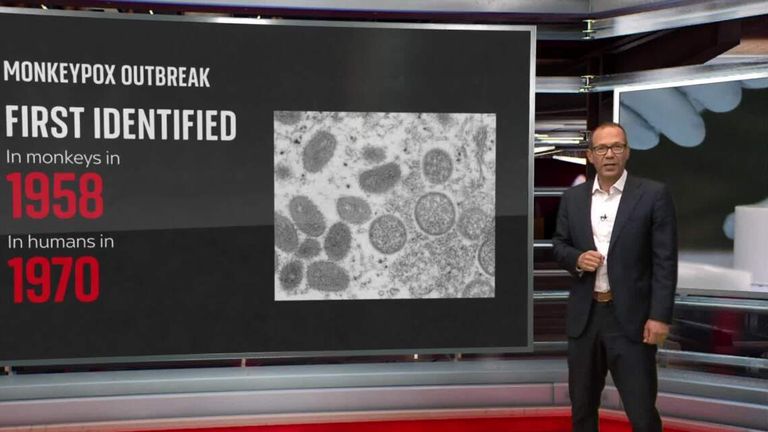 Monkeypox: What do we know?

A total of 2,137 cases have been confirmed in the UK, with 2,050 in England – the majority of which are in London, according to the latest figures released on 18 July.

In response to the move by the WHO, Dr Josie Golding, head of epidemics and epidemiology at health charity Wellcome, said: “Our world is growing increasingly vulnerable to outbreaks of infectious disease. The declaration of another Public Health Emergency of International Concern should serve as stark reminder to world leaders of this modern reality, and the weaknesses in our collective ability to prepare and respond.

“With monkeypox cases continuing to rise and spread to more countries, we now face a dual challenge: an endemic disease in Africa that has been neglected for decades, and a novel outbreak affecting marginalised communities. Governments must take this more seriously and work together internationally to bring this outbreak under control.

“Tried and tested public health measures including strengthened disease surveillance, contact tracing and equitable access to tests, treatments and vaccines for those most at risk is crucial. But governments must also support more research to understand why we are seeing new patterns of transmission, evaluate the effectiveness of our current tools and support the development of improved interventions.

“Without this swift and concentrated action, monkeypox will continue to infect even more people unnecessarily and become established in more populations, including the risk of reverse spillover into animals. We cannot afford to keep waiting for diseases to escalate before we intervene.”

China ‘spy’ balloon: What are they? And why could they play a key role in the future of aerial reconnaissance?