Members of the public are queuing for hours to see the Queen lying in state – but MPs can skip the long wait.

A House of Commons spokesperson confirmed that Members of Parliament can view the Queen‘s coffin without having to queue for miles – and can also bring up to four guests.

Parliamentary House staff can also avoid the line, which was around 3.5 miles long at 11am according to the Department for Digital, Culture, Media and Sport, and have been offered one guest ticket each.

Accredited journalists who have access to the parliamentary estate are also able to bypass the queue to see the Queen by booking allocated time slots.

This morning, former prime minister Theresa May joined thousands of mourners paying respect to the Queen lying in state in Westminster Hall.

Dressed in all black, Mrs May looked emotional as she paused for a moment of reflection at the monarch’s coffin.

Labour’s deputy leader Angela Rayner was another MP who took advantage of the opportunity to dodge the queue on Thursday.

Like Mrs May, Ms Rayner wore black and paused for a brief period next to the Queen’s coffin.

Meanwhile, mourning members of the public queued overnight in central London to see the Queen lying in state.

Thousands have been lining up along the South Bank in Waterloo with their waterproof jackets and cups of coffee before entering Westminster Hall to bid farewell to the Queen.

The route begins on Albert Embankment, next to Lambeth Bridge, before snaking down the River Thames.

As of 11am, the queue had gone past Tower Bridge. 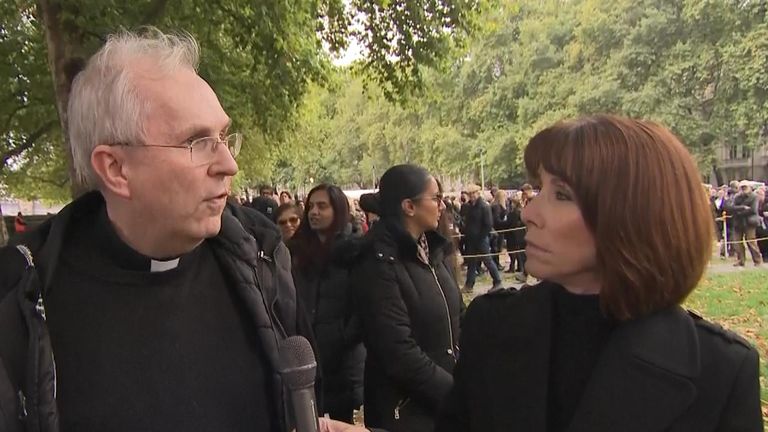 ‘What is a few hours standing in line?’

Hundreds of thousands of people are expected to walk past her coffin after the doors opened to the public at 5pm on Wednesday.

They will stay open for four full days until 6.30am on Monday 19 September – the day of her funeral.

The Queen’s coffin continues to be guarded at all hours by units from the Sovereign’s Bodyguard, the Household Division or Yeoman Warders of the Tower of London.

The first person to join the queue was Vanessa Nathakumaran, who arrived at 11.30am on Monday.

Keir Starmer says he ‘hated’ being investigated by police over beergate