The pound has fallen to a record low against the dollar, sparking market speculation that the Bank of England may be forced to intervene.

A statement from the Bank was expected later on Monday after sterling slipped by nearly 5% earlier in the day to $1.0327 – building on fresh 1985 lows seen on Friday after UK chancellor Kwasi Kwarteng unveiled the biggest programme of tax cuts for 50 years.

The £45bn tax-slashing package saw the market deliver a verdict on the sustainability of the public finances, given the additional demands it will place on government borrowing.

Bond markets also continued to reflect the crisis of confidence, with the rates being demanded in return for investor cash hitting levels not seen since 2008.

The pound plunged below its all-time low against the greenback – set in February 1985 – of $1.054 early on Monday in Asian trading, fuelling fears that parity was possible ahead.

The currency later stabilised at around $1.07 – still over 1% below the previous session’s close and 5% down on where it had stood early on Friday morning before the mini-budget.

Market participants said the partial recovery reflected growing expectations of an unscheduled meeting of the Bank of England’s rate-setting committee.

The government’s growth plan was clearly the catalyst for Friday’s plunge but traders said it had since intensified the focus more widely as the dollar also shot up against a basket of other international currencies.

Joseph Capurso, head of international economics at Commonwealth Bank of Australia. wrote: “The poor situation in the UK exacerbates support for the USD, (which) can track higher again this week.

“If a sense of crisis about the world economy were to emerge, the USD could jump significantly.”

The euro fell to fresh 20-year lows versus the greenback amid growing recession fears linked to the war in Ukraine and in the wake of Italy’s elections that will see a far-right leader become the country’s new PM.

The Japanese yen was among other currencies in focus.

The trouble for both the UK and Europe more generally is that weak currencies raise dollar-priced goods, raising import costs and fuelling inflation further.

The UK also faces goods from the continent becoming more expensive because the pound’s value has also slipped sharply versus the euro, standing at €1.0948 – leaving it 10 cents lower since August. 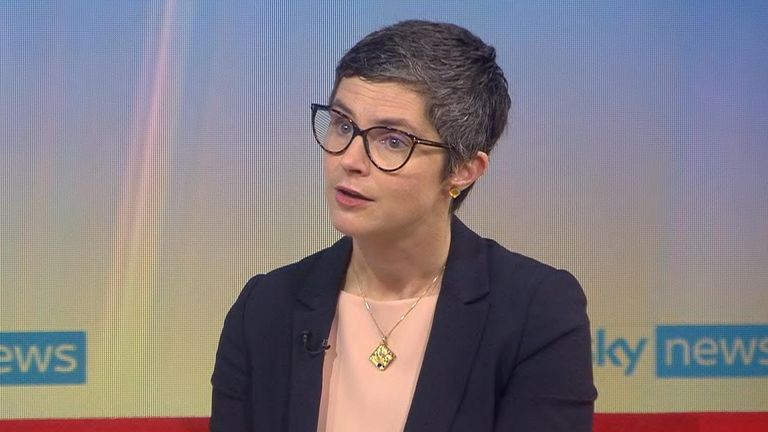 The rise in government borrowing costs saw the yield on the benchmark 10-year gilt hit almost 4.1% – the highest since April 2010.

Analysis of Bank of England and Refinitiv data by the Reuter news agency suggested the yield was on track for its biggest rise in a calendar month since 1957.

Shorter-term bonds were at levels not seen since the financial crisis.

Neil Wilson, chief market analyst at markets.com, said the market reaction to the government’s growth plan had resulted in a “very swift and very aggressive repricing”.

He wrote: “Does the Bank of England (BoE) intervene? Talk is of an emergency interest rate hike by the Bank to steady the ship.

“Traders now price in 150bps (1.5 percentage points) of hikes by the BoE by November, implying an expectation it comes out with a hike before the next meeting.”

Shadow chancellor Rachel Reeves told Sky News on Monday it was clear that a “credible plan for the public finances” was now needed to address the market concerns.

The PM’s spokesman reiterated the government’s line that it would not comment on market moves or interest rates, adding it was important that Bank of England independence remains.

In an interview with CNN on Sunday, Ms Truss rejected comparisons with US President Joe Biden’s approach after he said he was “sick and tired of trickle-down economics”.

She said: “We all need to decide what the tax rates are in our own country, but my view is we absolutely need to be incentivising growth at what is a very, very difficult time for the global economy.”

Asked whether she was “recklessly running up the deficit,” Ms Truss said: “I don’t really accept the premise of the question at all.”

Mr Kwarteng suggested his announcements were just the beginning of the government’s agenda to revive the UK’s stagnant economy.

“We’ve only been here 19 days. I want to see, over the next year, people retain more of their income because I believe that it’s the British people that are going to drive this economy,” he told the BBC’s Sunday With Laura Kuenssberg programme.

Read more: Mini-budget: PM going for broke in hope of winning big – but has she misjudged the public mood? | Beth Rigby

Mr Kwarteng is reportedly considering abolishing a charge for parents who earn more than £50,000 and claim child benefit, increasing the annual allowances on pension pots and a tax break for people who stay at home to care for children or loved ones.

If sterling fell to parity with the US dollar, it could trigger a rebellion among Tory backbenchers who could refuse to vote for the government’s finance bill or submit letters of no confidence, the Daily Telegraph reported, citing backers and critics of the prime minister. 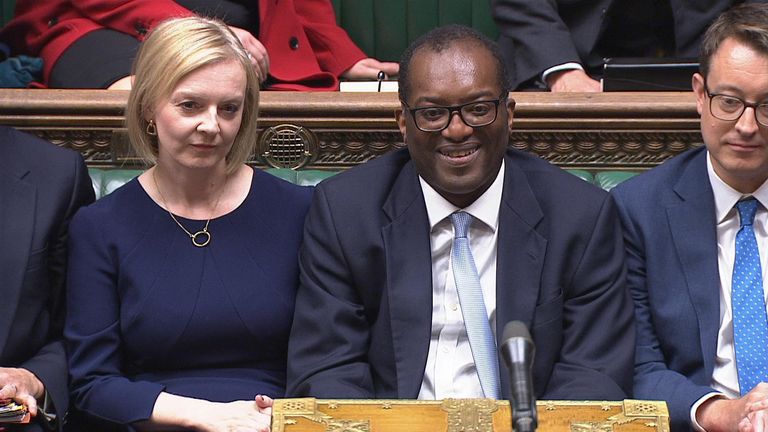 Asked whether he was nervous about the dropping pound, falling stock markets and rising cost of government borrowing, Mr Kwarteng said: “We’ve got to have a much more front-footed approach to growth and that’s what my Friday statement was all about.

“I think that if we can get some of the reforms… if we get business back on its feet, we can get this country moving and we can grow our economy, and that’s what my focus is 100% about.”

He refused to comment on market movements, saying: “I’ve been focused on the longer term and the medium term, and I think it was absolutely necessary that we had a long-term growth plan.”

Third child dies from Strep A in a week