The state funeral of Queen Elizabeth II is taking place as the King led members of the Royal Family in procession behind her coffin to Westminster Abbey.

Tens of thousands of people have travelled to London and Windsor for the funeral and burial service, which are being watched on television by millions around the world. 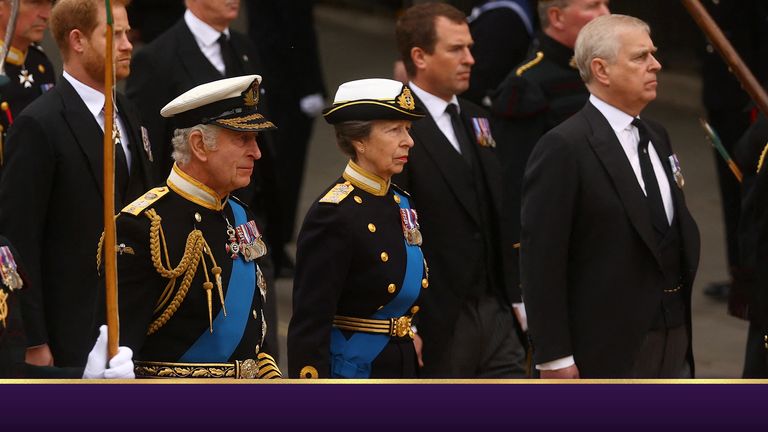 The Queen, Britain’s longest reigning monarch, is being laid to rest today next to her beloved husband, Prince Philip.

Some 2,000 people – including heads of state, prime ministers, presidents, and members of European royal families – have gathered for the funeral at the abbey, where the first guests began to take their seats from 8am.

Shortly after 10.35am, the coffin left Westminster Hall where the final members of the public queued overnight to see the Queen lying in state.

The coffin was lifted and carried in procession to the state gun carriage of the Royal Navy positioned outside the north door.

A grand military procession to Westminster Abbey involved a total of about 6,000 representatives from all three armed forces, with 98 Royal Navy sailors towing the 123-year-old gun carriage.

Senior members of the Royal Family walked in procession behind the Queen’s coffin, which was carried through the Gothic church by the military bearer party.

Inside the Abbey, the King and the Queen Consort walked immediately behind the coffin, followed by the Princess Royal and her husband Vice Admiral Sir Timothy Laurence, the Duke of York, the Earl and Countess of Wessex, and the Prince and Princess of Wales.

Prince George and Princess Charlotte walked with their parents in a side-by-side in formation, followed by their uncle and aunt the Duke and Duchess of Sussex and other members of the Royal Family.

Before the service, conducted by Dean of Westminster, the Very Rev David Hoyle, the tenor bell is being tolled every minute for 96 minutes, reflecting the years of the Queen’s life.

All public viewing areas for the funeral procession were full nearly two hours before the start of the service, London’s City Hall said.

However, thousands of mourners were set to miss the Queen’s funeral due to rail disruption on Monday morning.

All lines between Paddington in west London and Reading in Berkshire were blocked because of damage to overhead electric wires, Network Rail said.

The day marks the climax of what is being regarded as the biggest security operation the UK has ever seen, surpassing the operation for the Platinum Jubilee weekend and the London 2012 Olympics, which saw up to 10,000 police officers on duty per day.

The Queen died on Thursday 8 September at the age of 96, bringing an end to the monarch’s 70-year reign and triggering a period of national mourning.

The Royal Family will remain in mourning until 26 September, seven days after the funeral.