People aged 16 will be able to apply to change their gender in Scotland, while the time required for someone to live in their acquired gender is to be slashed to three months after a controversial bill was passed.

After two long days of debate in the Scottish Parliament, the Gender Recognition Reform (Scotland) Bill has been passed by 86 votes to 39.

• The minimum age at which someone can apply for a gender recognition certificate (GRC) will be lowered to 16 from 18.

• There will no longer be a need for a medical diagnosis of gender dysphoria in order to receive a GRC.

• The time required for an applicant to live in their acquired gender will be cut from two years to three months with a three-month reflection period (six months for 16 and 17-year-olds).

However, the bill might still face hold ups, with the UK government already suggesting it could block it gaining Royal Assent. 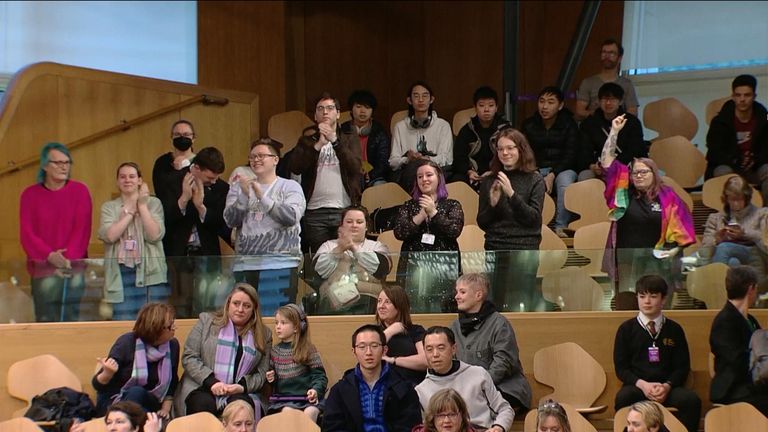 After two long days of debate in the Scottish Parliament, the controversial Gender Recognition Reform (Scotland) Bill has passed.

The bill has proved to be one of the most controversial in Holyrood since devolution but passed following support from many in the SNP, Greens, Labour and Liberal Democrats.

Protesters took part in demonstrations both for and against the bill outside Holyrood on Wednesday as MSPs went through the final amendments.

Opponents have raised concerns over its impact on the safety of women and girls, arguing the bill should not have been passed as it fails to protect women’s rights and single-sex spaces.

The UN’s special rapporteur on violence against women and girls said the reforms could allow violent males to “abuse” the system.

But the Scottish government has insisted the legislation will not impact the Equality Act, which allows trans people to be excluded from single-sex spaces such as changing rooms and shelters. The bill also proved controversial as it means the laws in Scotland will now be different to the rest of the UK.

More than 60 of the 153 amendments were voted on in the first sitting on Tuesday, with the rest in the day after.

There were protests from the public gallery as opponents shouted “shame on you” when an amendment that would make it harder for sex offenders to apply for a GRC was voted down.

The Scottish Conservatives appeared to be attempting to make the proceedings last as long as possible, tabling four amendments, a motion and a number of points of order before the debate had started – meaning the sitting on Tuesday finished at 12.15am.

The next sitting, which began on Wednesday, ran even later eventually concluding at 1.15am on Thursday morning.

While First Minister Nicola Sturgeon has been a strong supporter of the bill, not all in the SNP have toed the line, with seven MSPs from the ruling party voting against it and two others abstaining at stage one.

Minister Ash Regan was forced to quit over her objection.

An amendment to ensure applications are paused if an applicant is charged with a sexual offence until their case is disposed of divided members evenly, with the deputy presiding officer voting against it so it was not added to the bill.

The SNP deputy leader in Westminster, Mhairi Black, welcomed the passing of the bill on Twitter, posting the word “finally” along with a trans flag emoji.

Trans rights activist Dylan Hamilton told Sky News: “It [the bill] makes it easier for banking and easier to apply for a passport. I socially transitioned when I was 13, it was pretty obvious for me, I new I wanted to transition.

“A GRC is sort of an administrative thing, it doesn’t affect your right to spaces, it’s not kind of a ‘pass to be trans’. Transwomen, transmen have been using the toilets of their choice for years, I know I have.”

However, the passage of the bill does not completely clear its path to the statute book.

The Scottish Secretary, Alister Jack, is now able to legally challenge the law if he believes it impacts on the UK, while private groups are also able to take legal action if they wish to do so.

In a statement after the final vote, Mr Jack said the UK Government would consider taking it to the Supreme Court.

“We share the concerns that many people have regarding certain aspects of this Bill, and in particular the safety issues for women and children,” he said.

“We will look closely at that, and also the ramifications for the 2010 Equality Act and other UK wide legislation, in the coming weeks – up to and including a Section 35 order stopping the Bill going for Royal Assent if necessary.”