Rishi Sunak and Ursula von der Leyen have insisted they will work together to find a solution to the row over the Northern Ireland Protocol, as pressure grows to break the diplomatic deadlock.

In a call on Thursday, the prime minister and the European Commission president discussed the post-Brexit trading arrangements in Northern Ireland.

A lack of progress on the issue has caused major political turbulence in recent months, with the DUP blocking a return to powersharing at Stormont, the devolved parliament, due to its opposition to the protocol.

Read More: What is the Northern Ireland Protocol?

The DUP claims the protocol has undermined Northern Ireland’s place within the UK by creating economic barriers on trade entering the region from Great Britain.

The UK and EU agreed to the mechanism after Brexit to avoid the introduction of a hard border between Ireland and Northern Ireland.

However, it has effectively placed a border in the Irish Sea as Northern Ireland has to stick to some EU import/export rules, while goods moving from Great Britain to Northern Ireland are subject to a tariff if they are “at risk” of being moved into the EU afterwards.

Attempts by the UK to override the protocol with the Northern Ireland Protocol Bill have put Downing Street on a collision course with Brussels which says this would be a breach of international law.

“On the Northern Ireland Protocol, they agreed on the importance of working together to agree a solution.”

This is not the first time they have made such a promise – with the pair agreeing to work together when they met during COP27 in November.

The call comes less than a week after Mr Sunak visited Belfast, when he promised to work “flat out” to restore power sharing and find a solution to the protocol. 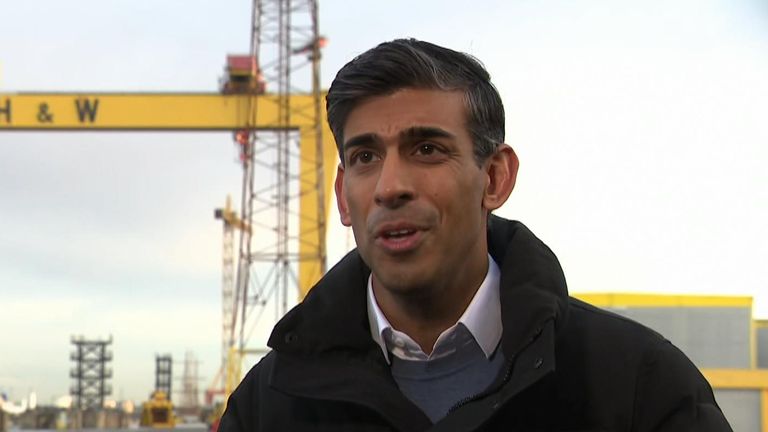 However, writing in the Daily Telegraph on Monday, former DUP leader Arlene Foster claimed parties were given “next to no notice” of the visit and accused the PM of lacking passion for the union.

Meanwhile, the British Chambers of Commerce (BCC) called on the government to look again at how trade with Europe can be improved, two years on from the deal agreed by former prime minister Boris Johnson.

The business organisation has warned that Brexit is not helping its members to expand or boost sales, in the latest criticism of the economic impact of the UK’s departure from the EU.

Last month, the Office for Budget Responsibility (OBR) said Brexit had caused a “significant adverse impact” on trade volumes and business relationships between UK and EU firms, while many economists have said it is partly to blame for recent tax hikes to fill the UK’s £54bn fiscal black hole.

Shevaun Haviland, director general of the BCC, called for an “honest dialogue” on improving the UK-EU trading relationship.

“Businesses feel they are banging their heads against a brick wall as nothing has been done to help them, almost two years after the TCA was first agreed.

“The longer the current problems go unchecked, the more EU traders go elsewhere, and the more damage is done,” she said.

Read More:
Rishi Sunak says he is working ‘flat out’ to restore power-sharing in Stormont

Among a number of proposals, the body is calling for a supplementary deal with the EU that can eliminate or reduce the complexity of food exports for small and medium-sized firms, as well as a Norway-style deal that would exempt smaller businesses from the requirement to have a fiscal representative for VAT in the EU.

The BCC, echoing the concerns of other business groups, also urged the government to find an agreement to the ongoing row over the protocol.

‘Always more’ government could do

Food, farming and fisheries minister Mark Spencer earlier told Times Radio that there was “always more” that the government could do to reduce trade friction.

“Of course, there’s always more that we can do to try and ease the way for the passage of trade. We’re very keen to do that,” Mr Spencer said, when pressed on the BCC’s concerns.

He said that the UK had made progress, citing an increase in the number of seasonal worker visas available in the horticulture industry next year.

Hilary Benn, Labour MP and co-convenor of the UK Trade and Business Commission, called on the government to prioritise easing the flow of trade between British and EU companies.

“Since Brexit, British businesses have been saddled with new red tape, costs and bureaucratic customs checks,” he said.

“While deep in the grips of a cost-of-living crisis, it is imperative that the government now prioritises making trade with Europe easier by removing the barriers which their unworkable deal has created.”