A former cabinet minister who is backing Rishi Sunak has criticised the former chancellor for questioning whether his competitor regrets being a former Remainer or Liberal Democrat more.

During Sunday’s leadership debate on ITV, Mr Sunak said: “Liz, in your past you’ve been both a Liberal Democrat and a Remainer, I was just wondering which one you regretted most?”

Theresa Villiers told Sky News the question “wasn’t the greatest moment of his campaign” and, in her view, a “regret”.

“I mean, that wasn’t the greatest moment of his campaign. I’d probably regret that, I’m not sure that was the right thing to do,” she told Kay Burley.

Politics Hub: Sunak vs Truss could get ‘quite unpleasant’

“But the important thing is who is going to be the person to get us through this inflation crisis, and I think Rishi has demonstrated he’s got the track record and he’s got the plan to do that.”

She added: “I absolutely want a positive contest and some of the hustings comments were… it’s always difficult when you’ve got people within the same party competing against one another.

“But I know Rishi wants to make a positive case about what he’s going to do to get us through what are going to be very difficult economic times.”

Asked if there was any “skulduggery” to ensure Penny Mordaunt – who was eliminated in yesterday’s fifth round ballot – did not make it through to the final head-to-head, the former cabinet minister said: “Well, certainly not that I was aware of, but it’s a notoriously sophisticated electorate so some of my colleagues, no doubt, did.”

She added that she does not believe the “Judas” characterisation of Mr Sunak said he would offer the Conservative Party a “fresh start”.

It came as Ms Truss, in her first broadcast interview of the leadership campaign, insisted she does not model herself on former Conservative prime minister Margaret Thatcher.

“I don’t accept that. I am my own person,” she told the BBC. Race to be PM: What happens now?

Ms Truss, a former Remainer who has sought to present herself as a true Brexiteer, also admitted she was “wrong” in her belief that the UK should stay in the EU.

“I fully embraced the choice that the people of Britain have made,” she told the BBC.

“I was wrong and I am prepared to admit I was wrong.”

“Some of the portents of doom didn’t happen and instead we have actually unleashed new opportunities.”

The foreign secretary also disclosed that she “wanted Boris to carry on as prime minister”, but stressed she is “not the continuity economic policy candidate”.

Meanwhile, asked if she would rule out working with the former chancellor, the foreign secretary told GB News: “No, I wouldn’t.

Read more:
What happens now only Truss and Sunak remain?

Ms Truss said her proposed tax cuts, equating to “around” £38bn a year, will be “affordable within our current fiscal rules”.

“My tax cuts will decrease inflation,” she continued. 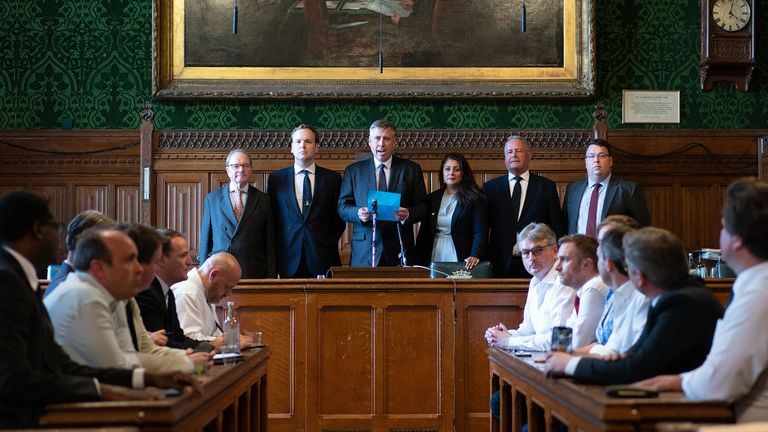 Mordaunt knocked out of Tory race

The foreign secretary also had a dig at her competitor Mr Sunak by saying it was “a mistake” to hike National Insurance payments.

Ms Truss said she “lost the argument on the matter”, adding: “I’m a loyal person and I went along with collective responsibility.”

Read more:
Who is Rishi Sunak?
Who is Liz Truss?

Elsewhere, Conservative peer and pollster Lord Hayward suggested that, despite being eliminated yesterday, trade minister Ms Mordaunt “could well have a major influence” over which of the two remaining candidates are elected as the next PM and leader of the Tory Party.

“One of the key things that both candidates will now be looking to is to get the support of Penny Mordaunt and her supporters out in the country, because support from Penny could well be key when it comes to votes in constituencies,” Lord Hayward said.

“Those who were supporting Penny Mordaunt, a large block of the party, both MPs and outside, they have got to decide.”

In the fifth and final round of voting by Tory MPs yesterday, the leadership contenders received the following support:

Ms Mordaunt had been second in all previous rounds of voting, but a late surge by Ms Truss – who gained 27 votes in 24 hours – cost her a place on the ballot, with only eight votes separating the pair.

Now it will be down to the wider Conservative Party membership to decide on its next leader from the final two after a summer of hustings, with a result set to be announced on 5 September.

Sky News has also announced it will hold a live TV debate between Mr Sunak and Ms Truss on Thursday 4 August, hosted by Kay Burley.

‘Where have you been the past two years?’ – Sunak and Truss clash over vow to ‘get tough’ on China