Donald Trump was engaged in a “multi-part conspiracy” to overturn the lawful results of the 2020 presidential election, according to a report by US politicians.

The House of Representatives’ January 6 committee has issued its final report, based on interviews of more than 1,000 witnesses, 10 hearings and millions of pages of documents.

Amounting to more than 814 pages, the seven Democrats and two Republicans documented their 18-month investigation into the insurrection at the US Capitol on 6 January 2021. A Congressional Committee in the United States has called for criminal charges to brought against former president, Donald Trump, over his role in the Capitol riots.

They concluded that the evidence “has led to an overriding and straightforward conclusion: the central cause of January 6th was one man, former President Donald Trump, whom many others followed.

“None of the events of January 6th would have happened without him.”

The investigation detailed Mr Trump’s actions in the weeks leading to the insurrection and how his campaign to overturn his election defeat influenced those who were involved.

It said that, between Joe Biden’s election victory and the certification of that victory – on the day of the insurrection – Mr Trump or his inner circle “engaged in at least 200 apparent acts of public or private outreach, pressure, or condemnation, targeting either state legislators, or state or local election administrators, to overturn state election results”. 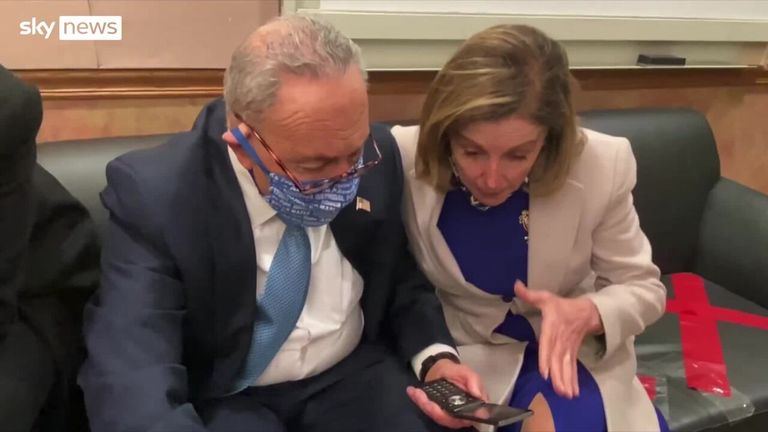 In full: Footage of the January 6 Capitol riot

“Knowing that he and his supporters had lost dozens of election lawsuits, and despite his own senior advisers refuting his election fraud claims and urging him to concede his election loss, Donald Trump refused to accept the lawful result of the 2020 election,” the report said.

“Rather than honour his constitutional obligation to ‘take care that the laws be faithfully executed’, President Trump instead plotted to overturn the election outcome.”

The committee said Mr Trump had pressured states, federal officials, politicians and even Mike Pence, his vice-president, in an effort to get what he wanted.

They said his claims of voter fraud were widely spread on social media, building on the distrust of government he had fostered during his four years as president.

And he did little to stop his followers when they violently took matters into their own hands.

The report found that 187 minutes went by between Mr Trump finishing a speech urging his supporters to march on the Capitol, and his first effort to get the rioters to disperse, which was done while reassuring them: “We love you, you’re very special.”

Several of his staffers pleaded with him to say something stronger, but he did not.

The report also detailed failings by law enforcement and intelligence agencies but it said these did not lead to the insurrection.

The committee’s chairman, Bennie Thompson, said in a foreword to the report: “The president of the United States inciting a mob to march on the Capitol and impede the work of Congress is not a scenario our intelligence and law enforcement communities envisioned for this country.”

The report recommends that Congress create “a mechanism for evaluating” whether to ban people mentioned in the report from future federal or state office.

The panel has also passed its investigation to the Justice Department, recommending the department investigate the former president on four crimes, including aiding an insurrection, but these referrals have no legal standing.

Writing on his Truth Social platform, he said: “The highly partisan Unselect Committee Report purposely fails to mention the failure of Pelosi to heed my recommendation for troops to be used in DC, show the “Peacefully and Patrioticly” words I used, or study the reason for the protest, Election Fraud. WITCH HUNT!”