Donald Trump has repeatedly teased that he will run for president again in 2024 – and is vowing to make a “very big announcement” next week in Florida.

Speaking at a rally in Ohio the night before polls open for the midterms, Mr Trump said: “I’m going to be making a very big announcement on Tuesday, November 15 at Mar-a-Lago in Palm Beach”.

Without giving too much away, he added: “We want nothing to detract from the importance of tomorrow.”

Election day begins in the US – live updates

While the former president did not provide further details about the announcement, many have been predicting that he could announce a run for 2024 to benefit from the expected Republican gains in the midterm elections.

In his two-hour speech, Mr Trump urged Americans to vote Republican “in a giant red wave”, adding that the country has “gone crazy” under Joe Biden’s administration.

The former president also said he would “end” Nancy Pelosi’s political career and criticised immigration at the US southern border calling it “wide open”.

Americans head to the polls today to vote in midterm elections, which could alter the balance of power in Washington and across the country.

The results will determine Mr Biden’s success and popularity and will either see the Democrats maintain control of Congress or lose it to the Republicans. 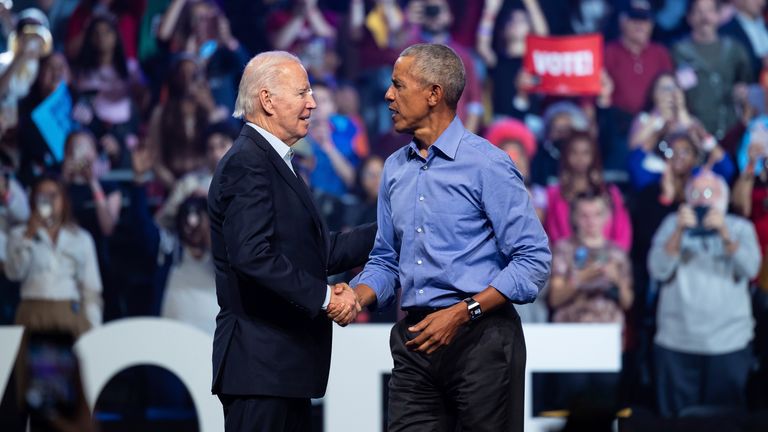 US Midterms: What’s at stake?

Some of the key issues dominating the elections include abortion, gun crime, education and immigration.

Speaking at his closing rally in Maryland on Monday night, Mr Biden urged Americans to “get out and vote”, adding: “This is going to shape what the next couple of decades will look like.”

Appearing alongside First Lady Jill Biden, the president warned his supporters that if Republicans take control of the House, “they’ll get rid of everything we’ve just done”.

Read more:
Who is Herschel Walker – Trump-backed Republican’s path from NFL
Election-denying candidate calls herself ‘Trump in a dress’
Why midterms are likely to have a profound effect on women’s rights

While Mr Trump did not announce a presidential bid last night, some Republicans feared that a launch before Tuesday’s vote could in fact boost Democrat turnout.

The Washington Post reports that Republican National Committee chairwoman Ronna McDaniel and House Minority leader Kevin McCarthy were among those who argued against an announcement before the vote.

Mr Trump has been increasingly explicit about his plans to launch a third presidential campaign, saying in recent days that he would “very, very, very probably” run again and would be formalising his intentions “very, very soon”.