The US House of Representatives has adjourned after failing to vote for a new speaker for the 11th time.

Republican Party leader Kevin McCarthy has failed in every round to secure the 218 votes needed to win, and the House will now carry out a 12th round of voting at noon on Friday.

The loss means the race is now tying for the fifth-longest speaker selection process in history – an election that took place more than 200 years ago, in 1821.

Read more: It’s difficult not to see parallels between chaos of US Republican party and UK Conservatives, writes Adam Boulton

The Republicans took control of the House following the midterms, where they secured a slim 222-212 majority.

However, the stalemate in the vote for a new speaker has exposed the rifts within the party in what is usually a routine vote at the outset of a legislative session.

At least 200 Republicans have backed Mr McCarthy in each of the votes this week and although fewer than 10% of Republican lawmakers have voted against him, it’s enough to deny him the 218 he needs to succeed Nancy Pelosi as speaker.

Mr McCarthy has failed to garner the support he needs to get elected speaker due to a group of 20 hardliners who continue to refuse to back him.

House sat for eight hours in bid to get result

Thursday’s session continued for eight non-stop hours which included a speech by Florida politician Matt Gaetz nominating former president Donald Trump, who is no longer a house member, in a symbolic but pointed sign of the broad divisions within the party.

Read more:
What next for the deadlocked US House Speaker race?
TikTok banned on all US House of Representatives-issued mobile devices

Mr McCarthy has served as the top House Republican since 2019 and led his party’s successful effort to win control of the chamber in the 2022 midterm elections.

He secured the backing of Mr Trump, but is under growing pressure from Republicans and Democrats to get the votes, so the House can resume business.

To win support, Mr McCarthy has already agreed to many of the demands of his opponents, but has resisted implementing one of the key asks, which is to reinstate a rule that would allow a single lawmaker to seek a motion to vacate the chair.

This would essentially allow a lawmaker to call a House vote to oust the speaker. 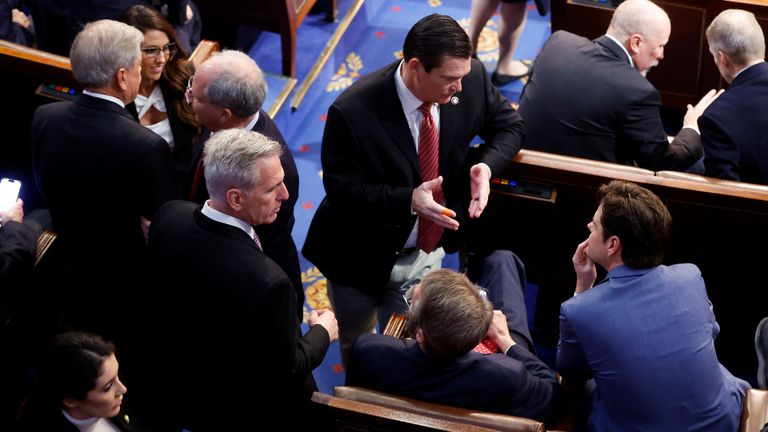 Chaos in US House speaker vote

Among Mr McCarthy’s prominent opponents includes Scott Perry, the chair of the House Freedom Caucus – the furthest right ideological group in the House and the home of almost all of his opponents.

With his party’s slim majority, Mr McCarthy cannot afford to lose the support of more than four Republicans as Democrats united around their own candidate – Hakeem Jeffries.

The House, which is one-half of Congress, is essentially at a standstill, unable to launch the new session, swear in elected members and conduct official business.

The US House speaker holds a post that normally shapes the chamber’s agenda and is second in line of succession to the presidency – behind Vice President Kamala Harris.