‘Where have you been the past two years?’ – Sunak and Truss clash over vow to ‘get tough’ on China

Liz Truss’ team has accused Rishi Sunak of cosying up to China while he was chancellor after he pledged to impose curbs on Beijing and called it the “biggest long-term threat to Britain”.

Mr Sunak has promised to close all 30 of China’s Confucius Institutes in the UK in a major hardening of government policy on China if he became PM.

The institutes are funded by the Chinese government and are meant to be culture and language centres, but critics claim they are propaganda tools as relations between the West and China worsen.

Mr Sunak accused China of “stealing our technology and infiltrating our universities”, while “propping up Putin’s fascist invasion of Ukraine”, bullying Taiwan and contravening human rights in Xinjiang and Hong Kong, as well as suppressing their currency to “continually rig the global economy in their favour.

He also pledged to lead the world in standing up to China’s “technological aggression” by amending the Higher Education Bill to force British universities to disclose any foreign funding partnerships of more than £50,000.

Mr Sunak has also committed to reviewing all UK-Chinese research partnerships that could assist China technologically or have military applications, as well as expanding MI5’s reach to provide greater support to British businesses and universities to counter alleged Chinese industrial espionage.

He said he would look at whether there is a need to prevent Chinese acquisitions of key British assets to address concerns about the scale of Chinese investment in key industries.

“I will stop China taking over our universities, and get British companies and public institutions the cyber-security they need,” he said.

“And I will work with President Biden and other world leaders to transform the West’s resilience to the threat China poses.”

Sir Iain Duncan Smith, who backs Ms Truss and has been sanctioned by Beijing, said the “‘tough on China’ announcement is surprising” as he accused the Treasury, led by Mr Sunak, of pushing hard for an economic deal with China over the past two years despite major human rights’ violations and increasing influence in UK universities.

He added: “After such a litany, I have one simple question, where have you been over the last two years?”

A spokesman for Ms Truss said she had “strengthened Britain’s position on China” since becoming foreign secretary and “helped lead the international response to increased Chinese aggression”, which would continue if she was PM.

Her team accused Mr Sunak of consistently being “soft” on China and of being backed by Beijing state media, as they said The Global Times has “effectively endorsed” Mr Sunak as PM.

They added that Ms Truss pushed for projects such as the Sizewell C nuclear power station in Suffolk to not be dependent on Chinese companies and funding, and said if she was PM she would focus on tackling aggression seen by China and Russia.

The team provided a list of times she has spoken out about China’s attempts to influence other countries and its “economic coercion”.

Education Secretary James Cleverly told Times Radio Ms Truss, who he is supporting, has “been talking about this for a long time”.

Sunak supporter and former foreign secretary Jeremy Hunt told Sky News he thought Mr Sunak was “right to call that out” in terms of his plan to ban Confucius Institutes and added that universities need to have “full freedom of speech”.

Foreign Secretary Ms Truss, who continues to be more popular among Tory members, has promised to cut red tape and boost investment as part of her bid to defeat Mr Sunak.

Her latest campaign pledge would see brownfield sites and other locations being turned into “investment zones” – dubbed “full-fat free ports”.

The zones would have a low-tax burden, reduced planning restrictions and regulations tailored on a case-by-case basis.

“As prime minister, I will be laser-focused on turbocharging business investment and delivering the economic growth our country desperately needs,” Ms Truss said.

“We can’t carry on allowing Whitehall to pick the winners and losers; like we’ve seen with the current freeport model.” 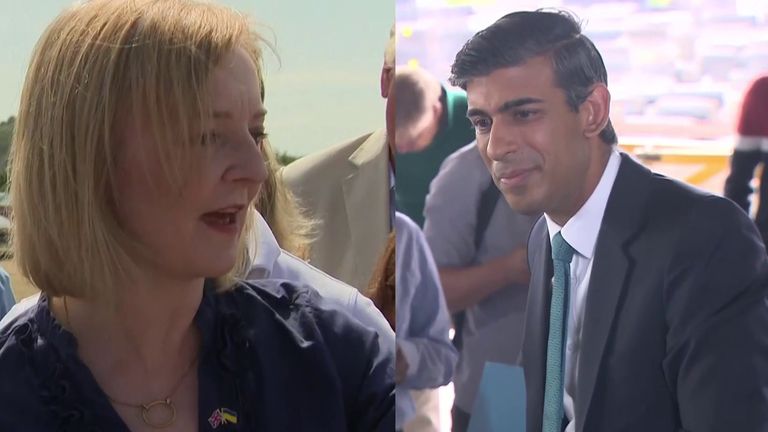 Truss and Sunak get tough on migration

The plan could be seen as an attempt to overshadow Mr Sunak, who has been a big supporter of free ports since he was a backbench MP. He has positioned himself in the contest as the “common-sense Thatcherite” candidate.

In a think-tank report in 2016, before he became a cabinet minister, he said: “Brexit will provide the UK with new economic freedom, and the government should take the opportunity to create free ports across the nation.”

And in what could be viewed as an implicit criticism of the former chancellor’s record, Ms Truss said she would reform current government policy to “unleash the potential” of current free ports.

“By creating these new investment zones, we will finally prove to businesses that we’re committed to their futures and incentivise them to stimulate the investment that will help deliver for hardworking people,” she said. 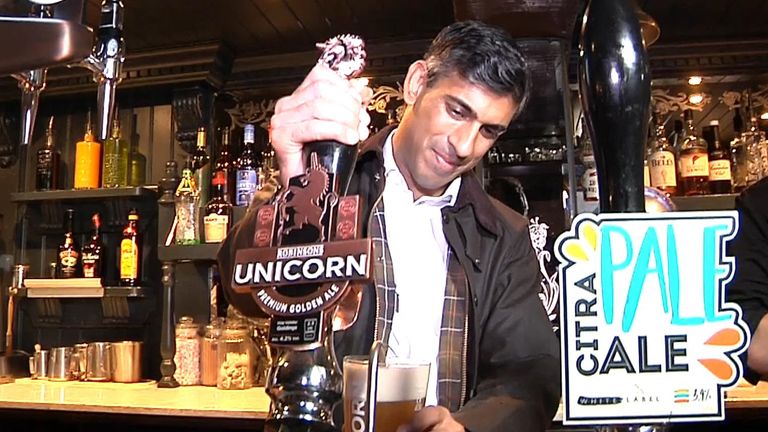 Over the weekend, Mr Sunak revealed his 10-point plan to tackle illegal immigration, including placing a cap on refugee numbers each year.

Ms Truss said she would expand the Rwanda scheme to other countries. The scheme aims to send Channel migrants to the African country, but has failed so far due to legal challenges.

Labour leader Sir Keir Starmer will use a speech in Liverpool on Monday to condemn the Conservative government’s record over the last decade and to hit out at the “Thatcherite cosplay” from Mr Sunak and Ms Truss. Cosplay is normally when people dress up as characters from a film, book or video game.

He will say the priorities for the next Labour government will be “growth, growth, growth” and there will be “no magic money tree economics with us”.

Rishi Sunak and Liz Truss will take part in a head-to-head debate on Sky News on Thursday 4 August at 8pm hosted by Kay Burley.

Johnson says energy prices should not be capped for everybody