A woman who was shot dead at a pub on Christmas Eve has been named as 26-year-old Elle Edwards.

Ms Edwards was out enjoying Christmas with her sister and friends when she was shot in the head at the Lighthouse Inn in Wallasey Village on the Wirral, in Merseyside, shortly after 11.50pm.

She is not believed to have been the target of the shooting, which also left four others injured – one of them critically. Police are still searching for the gunman.

Writing on Instagram, they added: “Heaven gained the most beautiful angel. We are all heartbroken, thinking of all of your family right now Elle.

“Thank you for all of the laughs and happiness you brought into our lives, rest in paradise angel, love from your team at Nova.”

Family and friends laid flowers at the scene of the shooting on Boxing Day, led by Ms Edwards’ father, Tim Edwards.

Her family has been left “devastated” and “inconsolable” by her death, police said in their appeal to the public for information.

Police appeal for information on gunman and dark-coloured vehicle

Detective Superintendent Sue Coombs told a news conference on Christmas Day: “Her family have been informed, and on today, which should be a day with friends celebrating, they are coming to terms with this tragic loss.”

DS Coombs said officers believe the gunman fired shots towards the front entrance of the pub.

“We know that minutes later, a dark-coloured vehicle, possibly an A-class Mercedes, was seen to leave the pub car park, so we are particularly keen to speak to that male and anybody who knows anything about that vehicle,” she said.

A 28-year-old man also injured in the incident remains in a critical condition in hospital following the shooting.

The MP for Wallasey, Angela Eagle, told Sky News she was “heartbroken” at the “senseless” act.

She described the area as a “very settled, good community”.

She added: “The police have emphasised the place that this happened, is not to do with the place, and I hope that will reassure frightened constituents who found themselves in the middle of this appalling tragedy.”

Ms Eagle urged members of the public to contact Merseyside Police should they have any information about the shooting, “no matter how small”.

“Merseyside [police] are extremely good, and very experienced, unfortunately, at dealing with these kinds of incidents,” she added, referencing a trail of violence that has left heartbreak and bloodshed in its wake across the region in recent months.

Read more from Merseyside:
Women dies after being hit by police car
200 arrests made in search for nine year old Olivia’s killer
Mum found dead lying next to her three-year-old daughter 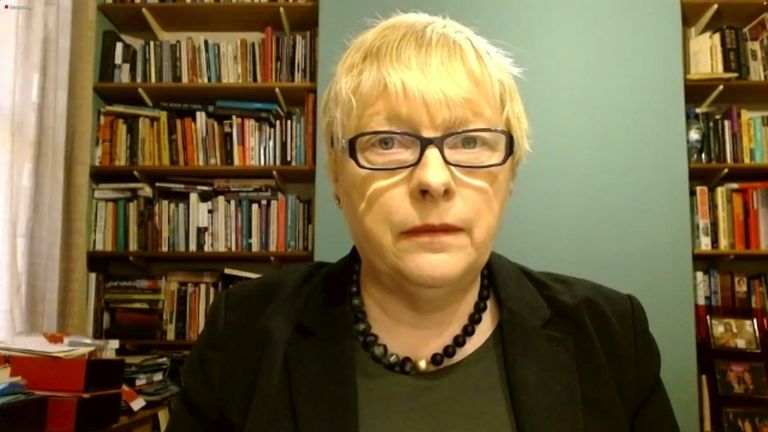 Neighbour Jenny Hough, 77, said she heard shots being fired, but initially thought it was the sound of fireworks.

“I just thought it was people celebrating midnight on Christmas Day. I couldn’t believe it when I looked outside, I thought ‘oh crikey’. It’s a complete shock.

“My sister’s garden had been broken into. We suspect it was people trying to get out of the pub and trying to climb over the wall and into her garden to get out.”

‘People were facing fuel bills of £6k – we had to act’: Truss defends economic strategy